COMPA - Teatro Trono – What is the situation in El Alto/Blolivia? 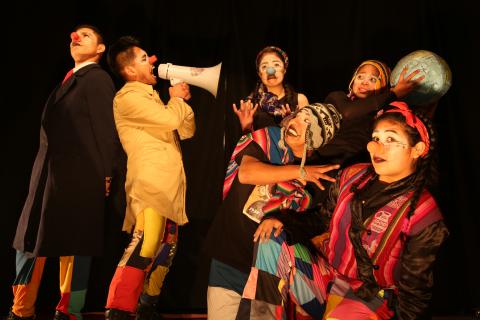 What is the situation in El Alto/Blolivia?

Supported by the armed forces, they moved into the presidential palace, accompanied by high ranking military personnel (one of them put on Yanine Añez's presidential sash) and with the Bible in her hand as a symbol of power. They shouted loudly that the Whipala (holy symbol of the Andes people) would never again enter the government palace. They even burned the Whipala symbolically. This action reminded us of the time of the Spanish Conquista. All this caused much indignation among the population and the communities, including in the city of El Alto, where a demonstration was organised against these racist attitudes. The reaction of the transitional government to these demonstrations, not only in the city of El Alto (Senkata zone) but also in Sacaba (Cochabamba), was armed intervention by the military, which resulted in 80 deaths in an inhuman manner. This transitional government is corrupt, repressive and very nepotistic.

Corrupt because there have been many financial inconsistencies since they came to power, such as the purchase of ventilators to help COVID-19 sufferers, which according to the Minister of Health was very expensive but according to the media very cheap. The government is repressive because it is taking advantage of the quarantine to pass laws that violate human rights, such as Supreme Decree 4232, which gives the Bolivian government a free pass to work with transgenic maize, sugar cane, cotton, wheat and soya seeds.

Another decree that was passed was Decree 4199, which is directed against free written, narrative and artistic expression.
The government is also repressive because it has military control over the streets in the areas or neighbourhoods that rebel against the violent attitude of the government and its ministers. Bolivia has never had an adequate health system, which is now deteriorating due to the circumstances caused by the virus. People are buying respirators that are not only very expensive (according to the health minister, who was even arrested for his testimony and shortly afterwards dismissed without charge), but also unsuitable. There is a lack of materials to test for the virus, doctors and nurses have no suitable protective clothing and are constantly exposed to infection. Hospitals do not have adequate infrastructure to receive coronavirus patients and private clinics are quite expensive. Many patients who have become infected with the virus do not go to health centres for fear of discrimination, as they are stigmatised.

What is the situation of COMPA/Teatro Trono?

The Teatro Trono y Compa is going through a difficult time. The cultural centre is closed due to quarantine and we cannot offer artistic workshops that would be necessary to cover the basic costs of the centre. All activities planned to celebrate the 30th anniversary of Trono have been cancelled, including community events such as shows, lectures, debates, creative workshops, etc.

We are part of a Latin American movement on an international level called Cultura Viva Comunitaria, through which we participate in Community Care Weaves by bringing food to the neediest families.

We also organize internal actions as Trono to support our own members of the group and the house. Many of the group members do not have the resources to survive the pandemic period, so we are collecting food to support ourselves. We also do this in one of our houses further away from El Alto, where children from broken and economically disadvantaged families, as well as people who were victims of the Senkata massacre, are housed.

We make short videos in which young people discuss quarantine in the form of readings and dance and talk about topics such as medicinal plants. These are shared via social networks. We also organise virtual workshops to talk about the current situation and our future actions in the face of the pandemic and beyond.

How do you feel personally?

Personally, I am very frustrated on the one hand with the transitional government, which puts us in uncomfortable situations, as it is a group of people who notoriously use their power to enrich themselves with money that is due to the population. On the other hand, I feel motivated to continue the struggle to change society through community art and community theatre, which we as Teatro Trono have been fighting for 30 years. It is a key moment to rethink ourselves as human beings and to consolidate the achievements that have already been fought for alongside the most oppressed and those who have a right to justice and respect.